Joey Is Looking In All The Wrong Places

Alice is an avid golfer, who, in her eagerness to play the game, has persuaded her husband, Joey, to join her so they could play together. Joey, not known for his athletic achievements, complied but never  has  acquired the skill level of his wife. Despite this, and some physical limitations, he diligently pursues the game anyway.

The golf course the couple play is heavily wooded on both sides of most fairways. On the occasion that Joey does hit the ball, it ends up going in a slow arching curve to the right, a shot golfers disgustingly call a slice. Because Joey never took a lesson  along with the slicing tendency of his shots, he spends a great deal of time in the woods.

“I have this problem.” Alice confided to her friend Margo. “It’s not a major problem. It’s one that bothers me every time I play golf. It has to do with Joey."

“Why is that such a problem?” Asked Margo.

“The problem is in the way he goes about looking for his lost ball.” She responded. “We all lose golf balls but we can usually find them because we look in the area of where the ball is lost. Joey looks only in places where it is easy to look and not where the ball landed.

“Whenever he hits it into the woods,” Alice said, “instead of walking into the woods at the place the ball went in, often because it is thicker and harder to gain access, he would go to a place where there was an easier opening.”

“Yes, but that’s the only place he looks”

It seems that once inside the woods, Joey has no way of knowing the line of entry the ball took in getting there so he isn’t quite sure where to look. If the path the ball took is in the more difficult and heavily wooded area, it blocks his vision and limits his search. So, he is drawn to looking in places where he can more easily see things. And unless his ball landed in that area he isn’t successful in finding it.

“When we play with other couples or when the group playing behind us keeps yelling to us that the ball ‘went in here’ and he is standing in a clearing some 40 yards away, it’s embarrassing” she lamented.

“I’ve told him many times that it takes up too much time to do what he is doing and he is not usually successful in his search. Why don’t you look where the ball enters the woods, I ask him?”

“It’s too woody and I can’t get in that way is Joey’s usual response.” Alice concluded. Alice went on to explain that Joey usually buys old golf balls so their loss doesn’t affect him.

She said her hope was to get Joey to look for his golf ball in the right place instead of the easy-place-to-look which would improve his chances of finding his golf ball, speeding-up the game and eliminating the embarrassment.

“Talking to him about his stubbornness didn’t work and nothing else seems to either. I just didn’t know what to do.”

“I didn’t do anything.” Alice proclaimed. “Luck did it for me.”

It seems that Alice and Joey signed up to play in a couple’s golf league. As luck would have it they drew the names of Gordo, an old friend of Joey’s from high school, and his wife as their partners to play in the same foursome all summer. The relationship between Joey and Gordo revolved around competitiveness; each trying to outdo the other. If Gordo should win a challenge between them he would let everyone know about his success in and effort to put Joey down.

Joey knew that if Gordo saw him hit a ball into the woods and not look for it where it went in, Gordo would look in that spot. If Gordo found a ball he would then announce the name of the golf ball to all, later in the club house. Because Joey hit so many balls into the woods, he wouldn’t remember if the ball Gordo found was his or not. The club members knew of Joey’s liking for the woods and would certainly assume the lost ball was Joey’s.

“How has it worked out?” asked Margo.

“It was tough for a while, but Joey started looking for the ball at the spot it entered the woods. But, because of the many scratches on his face and arms he got from the underbrush in looking there, Joey decided on taking lessons and since then his walks in the forest have diminished considerably” Alice smilingly ended.

Most of us would agree, I’m sure, that Alice’s problem—Joey not looking in the right place for a lost golf ball—is at best minor, but that is not the purpose in telling the story. What was done to solve the problem is the important message. The message is twofold:

One problem with this approach is that no one quite knows how to change personality character traits. Secondly, even if Alice were successful in changing Joey’s trait of stubbornness there is no assurance that Joey would stop looking in the easy spots, simply because it is more rewarding to do so. However, if Joey were to change his search pattern, his behavior, as he did, there would no longer be a problem. It’s the behavior, that is the problem and if you want to solve personal, emotional or behavioral problems you must first address the behavior involved.

When correcting people problems, you should remember: It is the behavior that is the problem. Without behavior there is no problem, so eliminate the behavior.

• When correcting personal, emotional or behavioral problems look to the relationship as the arena or medium in which the behavior is to be changed.

Joey’s behavior changed because of his relationship with Gordo. It was the competitiveness of their friendship that caused Joey to change the way he looked for lost golf balls and even caused him to prevent losing them by taking golf lessons.

These two issues of behavior and how it operates as the source of personal, emotional or behavioral within relationships will be more fully examined in future articles. 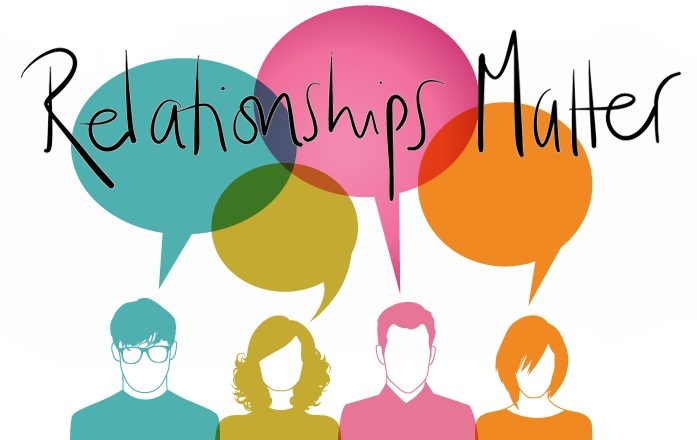